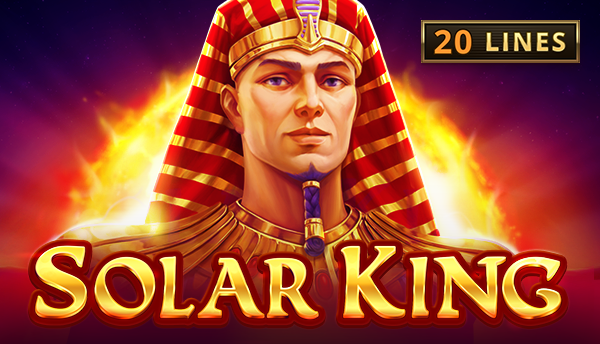 Playson’s newest slot offer Solar King is an Egyptian-themed 4×5 slot with 20 paylines. It comes with popular game features including the Sun symbol, the Flaming Frames feature with progressive line win multiplier, and the free spins mode with sticky wild symbols.

Solar King is Playson’s third title to the Solar series, after Solar Temple and Solar Queen. Like its predecessors, the game is set in Ancient Egypt with modern graphics and numerous features worth checking out.

Solar King is a game which adds 20 lines to a set up that spins 5×4 reels for each round. You can work your way towards the jackpot of up to 2,221x the stake. The slot is expected to have high volatility, but it relies on wilds, scatters, multipliers, and free spins.

The Sun icon is a major feature, because of the interesting mechanic it triggers. Its appearance on the reels can trigger a Flaming Frame features, where a countdown begins. The frame formed where the Sun lands will be there for the next 10 spins, by which it transforms into a wild towards the end. This can feature can get players multiple wilds at the same time, but after that happens, it all resets.

When players get Sun icons to appear in a position where a Flaming Frame is already in place, the multiplier for it increases. This can happen multiple times until the Flaming Frame turns into a Wild towards the end of the 10-spin cycle. If things all go according to plan, it’s possible to make wild multipliers of up to 10x.

Another feature to look into is when players land 3 scatters on the 1st, 3rd, and 5th reels, it can trigger 10 free spins. If they land the Sun icons in view, in their positions they will get sticky wilds, present for the rest of the game.