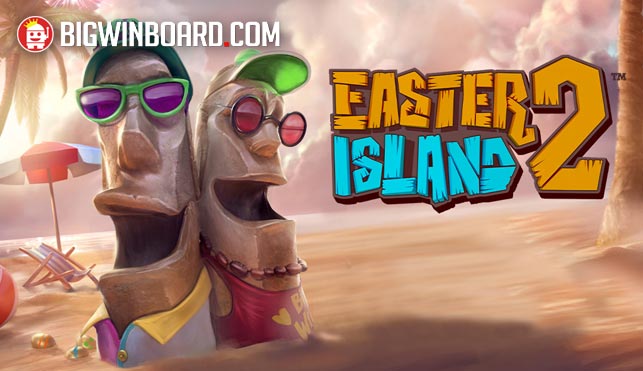 Easter Island 2 is a Polynesian-themed slot sequel from Yggdrasil Gaming. It features a good number respins and most of them are central to the game. The base game begins with 6 reels and 25 paylines, but this can get as high as 55 if you’re able to land a 6-of-a-kind winner. Each winning combination that lands triggers a respin with transformed symbols. 4,5 or even 6-symbol wins triggers 2×2, 3×3 and 4×4 colossal symbol blocks on those respins.

The game has a light-hearted, cartoonish quality to its design due to its Polynesian theme. The reels are surrounded by two of the famous Eastern Island statues who appear to be on their holidays, soaking up the sun and enjoying the sand and surf at Venice Beach. It’s a lot different from the original Easter Island slot game.

The reels are made up of 4 low value playing card suit symbols and 5 high paying animal statues (bird, fox, snake, turtle and fish). The bird is the highest paying symbol and it pays 4, 8, 16, or 40x a player’s total stake for 3, 4, 5 or 6 in combination. Wilds also exist. The symbols are made in easily recognizable Yggdrasil house style and are very easy on the eye.

Like most games on Yggdrasil’s portfolio, Eastern Island 2 has been fully optimized for play on mobile phones, tablets and desktop. It features a neat and crisp design which makes it easier to play on small screen devices.