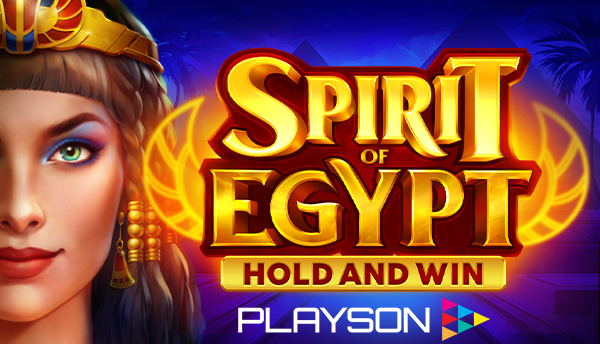 In addition to releasing immersive games, Playson has been actively signing partnerships with multipler operators, expanding its presence all over the world. The Balkan and LatAm region are just some of the territories where their adventurous games recently live.

Designed as a 3×5 grid, Spirit of Egypt: Hold and Win come with 20 fixed paylines and a set of symbols normally found in games inspired by the Egyptian civilization.

The Wild Icon replaces all the other icons except for Scatter and Scarab. It’s worth noting that it acts as a stacked symbol, creating even more chances of winning.

The Scatter, on the other hand, appears in the main game on central reels. Three Scatter symbols trigger a set of additional spins. At the start of each round, the Synced Reels feature is activated. During this mode, 2 to 5 consecutive reels are linked.

When six or more Scarabs hit the reels, they trigger the Bonus Game mode. When this mode starts, the reel enlarges to 5x, with the Scarab icon spreading randomly over the reels. During this mode, only the Scarab and Jackpot symbols are allowed on the vacant reels.

As for the Jackpots, Spirit of Egypt: Hold and Win has no less than three of those—Mini, Major, and Grand. Each of the icons symbolizing one of the jackpots appear randomly.