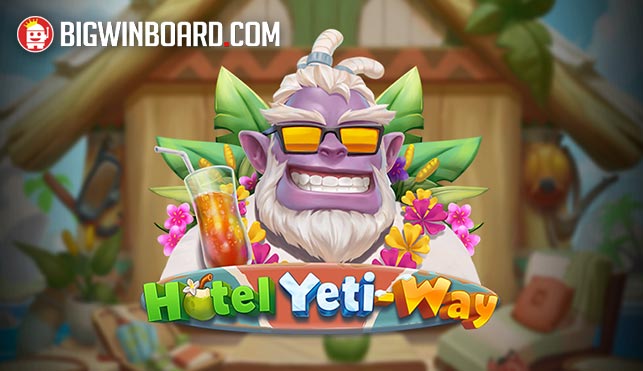 The newest addition to Play’n GO’s portfolio, Hotel Yeti-way, gets everyone in the mood for summer.

The Himalaya trail is not only treacherus but full of peril. Many unsuccessful adventurers have had no choice but to give up before reaching the top. After a Yeti comes across a discarded case filled with money and supplies, he decides to take a break from the icy mountains and head to a tropical paradise.

Hotel Yeti-way is an action-packed slot game, and the use of Dynamic Payways increases the thrill even more as it gives players more ways to win with each Free Spin. One or more of the reels on each Free Spin are chosen to have an x2 Multiplier, doubling the number of payways on that reel.

The Yeti acts as a Wild and Bonus symbol; each costume comes with a unique mechanic. The Scuba Diving Yeti grants players with re-spins when shark symbols are on the reels. The Surfing Yeti Wilds, on the other hand, will be added to the reels in random positions. Lastly, the Bungee Jumping Yeti expands to fill the reel; and then there’s the chance for the Yeti to create more Stacked Wilds across random reels.

A cheerful color scheme is used in the game, radiating that much-needed summer feeling. The Yeti breaks character as the snow-dwelling mountain creature; he seems a lot happier drinking Piña Colada by the beach.

Visually speaking, there is a lot going on in this game. The design team have paid attention to every detail. Backgrounds change, matching the theme of the Yeti’s different costumes, and brightly colored symbols show up on the reels.

“We wanted the Yeti character to engage with the players. The formula, if you like, of a change of outfits with the different mechanics is not only engaging visually but lends more to the play of the game itself. It’s a win-win.”